This is a paradise for mountain bike riders, and biking trails can be found in all directions. You can go to Signal Hill and Wakari Creek to experience world-class mountain biking downhills, or go for a hearty long-distance ride along the Swampy Summit Circuit. There are special cycling lanes and trails here, so that you can safely and comfortably shuttle between the cities. The surrounding mountains and bays outline a beautiful background for your riding.

Along the way you will find a variety of accommodation facilities, including bed and breakfast hotels, country inns, motels and holiday houses. You can send your luggage to your destination to reduce the burden of riding. After you arrive, you can take a ride back to the starting point, or transfer to Taieri Gorge Tourist Train and other transportation. There are countless exciting activities and beautiful scenery waiting for you to experience one by one on the way.

Central Otago is not only suitable for leisure cycling, but also has the sports conditions for mountain biking, allowing you to explore the secluded valleys and rivers surrounded by Qingtian Mountain. Whether Alexandra, Cromwell, Ranfurly, Roxburgh or Nevis Valley, there are staggered lanes to take you through Magnificent scenery and visit the remains of ancient gold mines.

Unlike Otago Peninsula, County Clare is a cycling route that allows you to enjoy some pitstops along the way. You are able to cycle through cities including towns including Ennis on the same cycling path as various beaches. This is a route that is quite popular in the summer, so if you are going to make a visit, plan well in advance.

San Juan Island is more challenging. You can also circumnavigate this island in a day—the loop and two scenic legs are about 43 miles—but there are enough places of interest along the way that you might want to plan for a couple of days so you can explore the beautiful parks, beaches, and attractions along the way. There are some substantial hills, and many roads with very narrow shoulders, so plan ahead and make sure you keep safety in mind.

This island offers a great 35-mile loop so you can explore without repeating your routes. Head out of Friday Harbor on Roche Harbor Road, and enjoy a ride to San Juan Vineyards, where you can take a break for a picnic and sample the winery’s wares or buy them by the glass.

But don’t tarry too long because you’ve still got the 6-mile ride to Roche Harbor Resort. You can explore this historic village by bike or foot, as well as the nearby San Juan Islands Sculpture Park—a beautiful 20-acre park you'll pass on the way into Roche Harbor, with more than 125 works of art on the shore of Westcott Bay.

Head south about from Roche Harbor about 7.6 miles to English Camp (American Camp is on the south end of the island), and each is famous for the Pig War “Crisis” of 1859-1872. Both National Historical Park locations offer information on this historic event, and each offers some beautiful views and picnic spots, although there are a couple of tough hills to get to both.

One mile down the road from English Camp, stop at Krystal Acres Alpaca Farm & Country Store to see a herd of multi-colored alpacas (who are shorn once a year) and shop for products made from their super soft hair.

About 6.8 miles down West Side Road, Lime Kiln Point State Park, a.k.a. Whale Watch Park, is another must-see spot, so stop off for a picnic, and look for orca whales in the open waters and visit the seasonal interpretative center which offers information on orcas and a history of the lime kilns and the nearby lighthouse. Take a 3.8-mile jog over to Pelindaba Lavender Farm on Wold Road during summer, where you'll find the calming views (and wonderful scents) of rows of lavender, and over 250 lavender products in the aromatic store. Picnic tables are also available.

To see American Camp, keep heading towards Friday Harbor on Bailer Hill Road, take a left on Douglas and a right on Cattle Point Road, which leads you to South Beach, the longest public beach in the islands, with views over the Strait of Juan de Fuca to the Olympic Mountains. Jakle's Lagoon, and the Cattle Point Lighthouse.

Head back up Cattle Point Road, which becomes Argyle Street, which leads back into Friday Harbor (about 9.7 miles).

Have spectacular views of the sea and cliffs while riding on this Cuban highway. The sight of the Cuban Tour de France, Vuelta Ciclista Cuba held every February, La Farola gives you true off-the-beaten-path biking in a very unique country. While Cuba works to build it’s touristic image, enjoy this route that, while not particularly difficult, isn’t novice-geared.

Cycle all or part of the Cabot Trail which, according to Lonely Planet, is one of the world's top ten cycling destinations.

...And now we're making it even better!  As work proceeds on upgrading the Cabot Trail, we are making every effort possible to provide a paved shoulder for cyclists. Road inclines are marked in steeper areas and bike stands have been installed at several locations.

Length of the steepest inclines

Here is a list of places you can find potable water along your bike ride. Check at the Ingonish and Chéticamp visitor centres for daily updates for availability of potable water sources.

Most of the locations mentioned are within the boundaries of the park, but we are also including the communities of Chéticamp, Petit Étang, Pleasant Bay, Cape North, Neil’s Harbour, Ingonish and Ingonish Beach, where water can be purchased.

Distances between the park's campgrounds

The major appeal of this biking trail is the fact that whenever you are able to access it, you know you’ll have a bike ride with great views of vineyards and great weather. A part of the Tour de France route, Mont Ventoux is only accessible in the summer and spring, being blocked by snow five months out of the year. This is truly on the lists of the most avid cyclists.

The Isle of Wight is certainly a biking trail made for just about anyone. The terrain is a mixture of both flat, accessible trails and rolling, challenging hills. Previously ignored by much of the region, the Isle of Wight is now on the map for its biking trails, meaning you’ll definitely encounter a fair amount of restaurants and special events to attend.

Located on the largest lake in Taiwan, Sun Moon Lake is as tranquil as the name gives off. From the lakeside views to the Spring time Cherry Blossoms, you’ll find that Sun Moon is a relaxing day bike trip, rather than an intense work out. This is great, making it welcoming for a group with varying experience.

If you are looking for an intense path, one where you can challenge yourself more than challenging your buddies, the Great Divide Mountain Bike Route is what you need to tackle. Stretching from New Mexico, USA to Alberta, Canada, the Great Divide Mountain Bike Route is officially the longest biking trail in the world. This is a trail you should train and aspire for, making it only for a subgroup of the experienced. But anyone can train themselves for this route if you truly want to conquer it.

Despite the Great Divide Mountain Bike Trail being the longest biking trail in the world, the Karakoram Highway between China and Pakistan highest road in the world with the highest altitude being well over 4000 kilometres. This highway is peppered with views of the beautiful glaciers and mountains that come with a biking trail in such a high elevation. Care should be taken when doing any strenuous activity in such high elevation.

Holland, especially Amsterdam, is known as one of the best places to be a biker in the world. This makes it no surprise that Route 10 biking trail makes the list. From windmills and tulips to canals and city centres, the whole city of Amsterdam is technically one of the best cycling trails in the world.

A great challenge awaits you with the Molesworth Road trail in New Zealand. The trail extends 320 km and is only open four months a year (December 28th – April 1st). Despite this, it isn’t a one-day task but your efforts will be well worth it in the end, with various beautiful sights, and even a hot spring on the way.

What I love most about Udaipur is that it feels as at home as a biking trail can feel. Instead of your encounters being either big cities as with many Dutch biking trails, or animals like in Canada, but you actually encounter Indian residents who live on the Udaipur trail. Not only people, but various villages. As a result, you get a truly grassroots experience of India.

This bike trail is a converted railroad track, all with various tunnels, paths, and an extra long trail pictured above, that is surrounded by trees. The Route of the Hiawatha, named after an Iroquois American-Indian leader, is well secluded but still quite enjoyable,family friendly, and relaxing.

Salzach is your quintessential Austrian bike trail, complete with beautiful meadows and mountains as a backdrop. You will find that along this trail, there are various sites to be seen. This is truly a bike trail you’re expected to make multiple pitstops on. From Salzburg to the Tauern National Park, they are all found along this trail.

Route des Grand Crus, which translates to “Road of the Great Wines”, is located in France’s wine countryside of Burgundy. The biking trail will pass by various luscious vineyards, with various opportunities to sample France’s most famous foods (wines and cheeses). Just make sure you don’t drink too much while biking, stay safe!

Biking through Dordogne Valley of France, located in southwestern France, is known for the various villages that are included in the area. You’ll find various famous chateaux sprinkled around the region. In true French fashion, you’ll never be too far from great wine and cheese. The Bergerac wine region encompasses Dordogne.

Known as a linear park, P’tit Train du Nord is accessible for any biking level. The light biking trail passes beautiful foliage and crystal clear water. The Canadian bike train, in the province of Montreal, includes the Mont-Tremblant resort, which can be a great end stop for your biking adventures with your family. 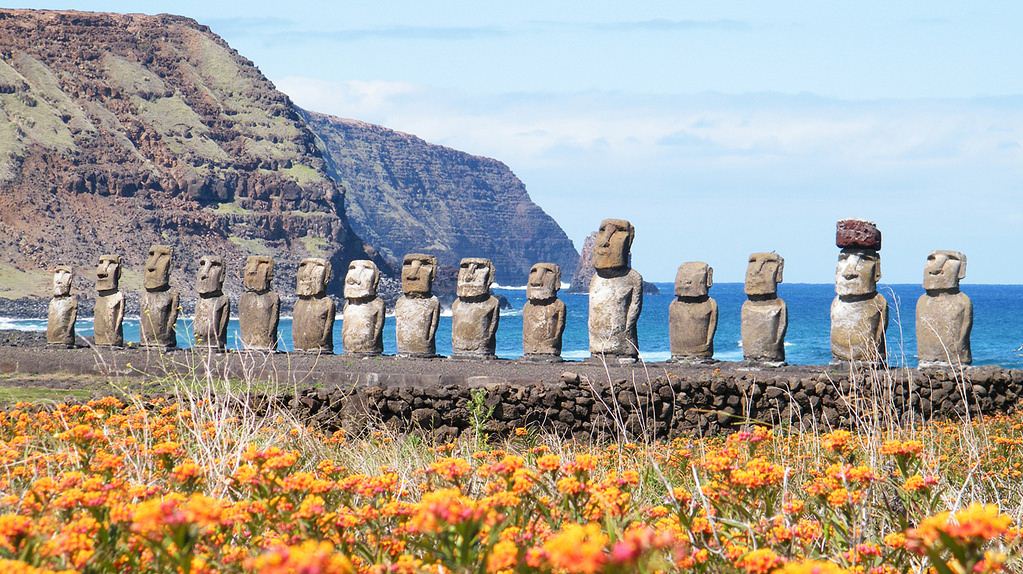 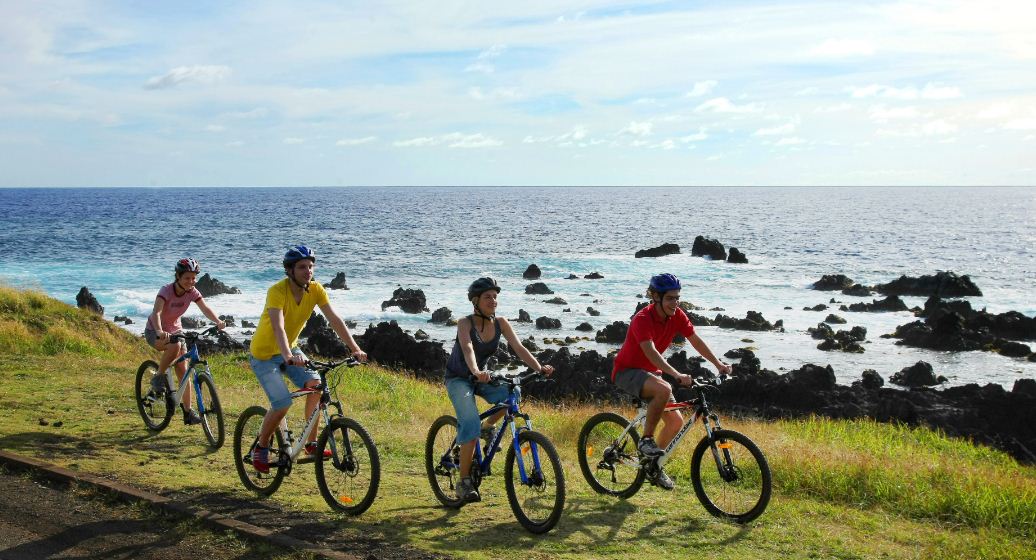 Easter Island may seem like an unlikely biking route, due too how it is famous for Moai, or large statue structures. However, Easter Island is very mountain bike friendly and is an easy trail for the most part. While you wouldn’t come to Easter Island just to bike, especially with the cost of coming to the Island, but it is a great addition to your trip if you are a cyclist.

The Sun Moon Lake bike trail is one of the bike trails I liked the most out of the trails mentioned on this list. Let me know in the comments below which trail you preferred. I’d love to hear your opinion.